MUST READ! SPANKING IS FOR ADULTS 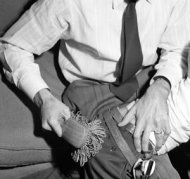 AP Photo/Don Brinn
In recent years, several children have died after enduring extreme forms of corporal punishment from parents who had absorbed the controversial child-rearing advice of Tennessee pastor Michael Pearl. Now, the New York Times reports, Pearl himself is under fire.
In their self-published book, To Train Up a Child, Pearl, 66, and his wife Debi, 60, recommend the systematic use of "the rod" to teach young children to submit to authority. They offer instructions on how to use a switch for hitting children as young as six months, and describe how to use other implements, including a quarter-inch flexible plumbing line. Older children, the Pearls say, should be hit with a belt, wooden spoon or willow switch, hard enough to sting. Michael Pearl has said the methods are based on "the same principles the Amish use to train their stubborn mules."
There are 670,000 copies of the book in circulation, and it's especially popular among Christian home-schoolers such as Larry and Carri Williams of Sedro-Woolley, Wash. In September, local prosecutors charged them with homicide by abuse after their adopted daughter Hana, 11, was found naked and emaciated in the backyard, having died of hypothermia and malnutrition. She had been deprived of food for days at a time, and made to sleep in an unheated barn.
Hana, originally from Ethiopia, also had been beaten with a plastic tube, as recommended by Michael Pearl. Carri Williams had praised the book--which advises that "a little fasting is good training"--and had given a copy to a friend, local authorities  say.
The Pearls aren't being charged. But Dr. Frances Chalmers, a state pediatrician who examined Hana's death, suggested to the Times that their teachings may have played a role in Hana's death. "My fear is that this book, while perhaps well intended, could easily be misinterpreted and could lead to what I consider significant abuse," she said.
That may also have happened in the case of Lydia Schatz, who was adopted from Liberia at the age of 4 by Kevin and Elizabeth Schatz of Paradise, Calif. She died last year, age 7, after her parents had whipped her for hours, with pauses for prayer. The Schatzes are both serving long prison terms, after Kevin Schatz pleaded guilty to second-degree murder and torture, and Elizabeth Schatz pleaded to voluntary manslaughter and unlawful corporal punishment. Like the Williamses, the Schatzes owned a copy of To Train Up a Child, and the local district attorney criticized it as a dangerous influence.
There was also Sean Paddock, of Johnson County, N.C., who died from suffocation in 2006, age 4, after he'd been wrapped tightly in a blanket. His mother Lynn Paddock, who said she had come across the Pearls' website, was charged with first-degree murder. Sean's siblings testified that they were beaten each day with a plumbing tube that the Pearls recommend.
The Pearls, along with many conservative Christians, say the Bible calls for corporal punishment. "To give up the use of the rod is to give up our views of human nature, God, eternity," they write in the book.
And Michael Pearl rejects the notion that his teachings bear any responsibility for the childrens' deaths. "If you find a 12-step book in an alcoholic's house, you wouldn't blame the book," he told the Times.
But other Christians appear to disagree. Crystal Lutton, who runs a Christian blog that opposes corporal punishment, told the Times that the Pearl's methods carry a big risk. "If you don't get results, the only thing to do is to punish harder and harder," she said.
Some Christian groups are working to pressure booksellers such as Amazon not to carry the Pearls' book.
The issue of corporal punishment had already been making headlines recently. Last week, a Texas woman posted online a video from 2004 that showed her father, a judge, whipping her with a belt when she was 16.
Want more of our best national affairs stories? Visit The Lookout or connect with us on Facebookand follow us on Twitter.
Posted by PRINCESS at 4:17 PM

I'M A PROUD MEMBER OF

PRINCESS
I feel like the luckiest woman in the world, I finally got it right. I finally found a man that I can respect and trust, and I'm proud to call him my husband of 6 years now. He keeps me centered and focused and where I need to be. He makes me a better wife, mother, and person. We're making it in a world that says we won't. We welcome you to join us on our Journey. ~PRINCESS AND HUBBY XOXO